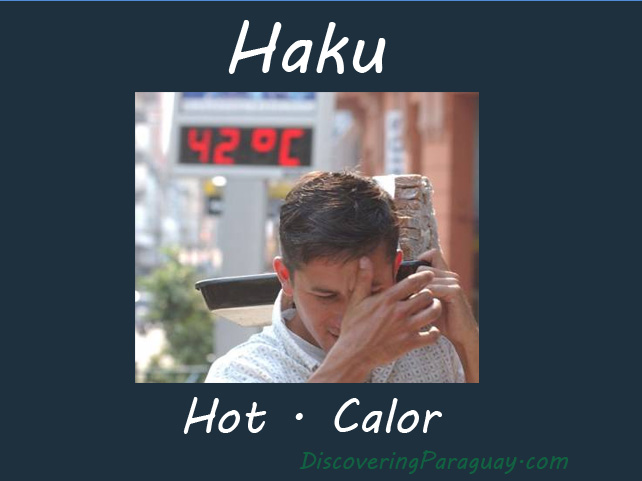 The majority of Paraguayans speak two languages: Spanish and Guarani, an indigenous language spoken in this region since before the arrival of European settlers. In everyday conversation most employ a combination of Spanish and Guarani, commonly referred to as “jopará.” In rural areas the mix is more Guarani-heavy, in urban areas people tend to speak more Spanish, peppering the conversation with occasional words or phrases in Guarani. The net result of this is that, as foreigner, you do not need to become conversant or even learn a full sentence in Guarani. Throw in a Guarani word here and there and you’ll send the signal that you are interested in Paraguayan culture. Start practicing with these phrases and you’ll soon find people are eager to teach you more. And, as an expat, what is better than bragging to your friends back home that you’re learning not one but two languages?

“Let’s drink tereré.” “Tereré” is a “yerba mate” (loose tea) based beverage Paraguayans use to temporarily beat the heat. Drinking “tereré” is a highly social ritual which Paraguayans love to share with foreigners. Sitting around chatting while drinking “tereré” under the shade of a tree (mangos give the best shade) is a great way to cool down and also soak in Paraguay’s laid back attitude. To learn more about “tereré” check out this “Good Food” interview. https://discoveringparaguay.com/home/tererekcrw/

“It’s hot!” Part proclamation, part conversation starter, this phrase is uttered throughout Paraguay on a regular basis (temps here are routinely in the 40’s during the summer and the 30’s in the spring). If it is really hot, you can say “haku etere’i.” Exclaiming “haku eterei!” will elicit an affirmative “haku eterei” in response. However, you should take care not to say “Che haku” (I’m hot), as that has a different, sexual meaning. During winter it is also probably best to refrain from saying “Che ro’y” (I’m cold) as the subtle difference in pronunciation between it and “Che ro’u” (I want to have sex) is difficult to master.

Paraguayans are generally positive people. In fact, according to a 2012 Gallup poll they are the happiest people on the planet! Join the positivity by answering “iporã” whenever anyone asks how you’re doing. Technically it means “pretty” in Guaraní but in this context is understood to mean “good.” Remember, the emphasis is on the last syllable. If you accidentally say “póra” with an emphasis on the first syllable you’ll end up telling someone they are as ugly as a ghost! 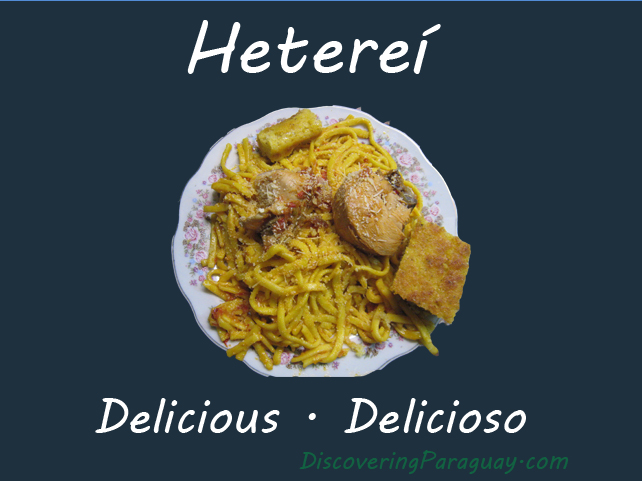 With their starchy cheese breads (“chipa”), fish chowders (“caldo de pescado”), and custardy bread puddings (“budín de pan”) Paraguayan cooks are masters of comfort food. Whether you´ve been invited to a friend´s house for lunch or are dining in a countryside hotel, the surest way to show your appreciation for the meal is to say “hetereí.” This means “delicious” in Guaraní. Of course, another way to prove you enjoyed the food is to ask for seconds. This should make most Paraguayan grandmothers just as happy.

This common expression is a combination of the Spanish word “tranquilo” which means tranquil and the Guaraní word for everything, “pa.” Even when life gets hectic, in Paraguay people will assure you all is calm and good. This often comes accompanied by a thumbs-up, a gesture that is quite popular here. Expats in Paraguay will find that both the “tranquilopa” outlook and the thumbs-up habit are contagious.

Rather than say good-bye, many Paraguayans prefer to take their leave by saying “ahata ayu,” which means “I’m going to leave and return.” When you depart Paraguay to visit your home country the promise of an eventual return will be comforting – both to you and your local friends.

A note about making mistakes: Paraguayans get a real kick out of hearing foreigners speak Guarani. Of course, there is always the possibility that you’ll mess up and unknowingly say something dirty. If you do, don’t worry! Being willing to laugh at your mistakes will prove you’re a good sport and the incident will make for a funny anecdote to write home about.