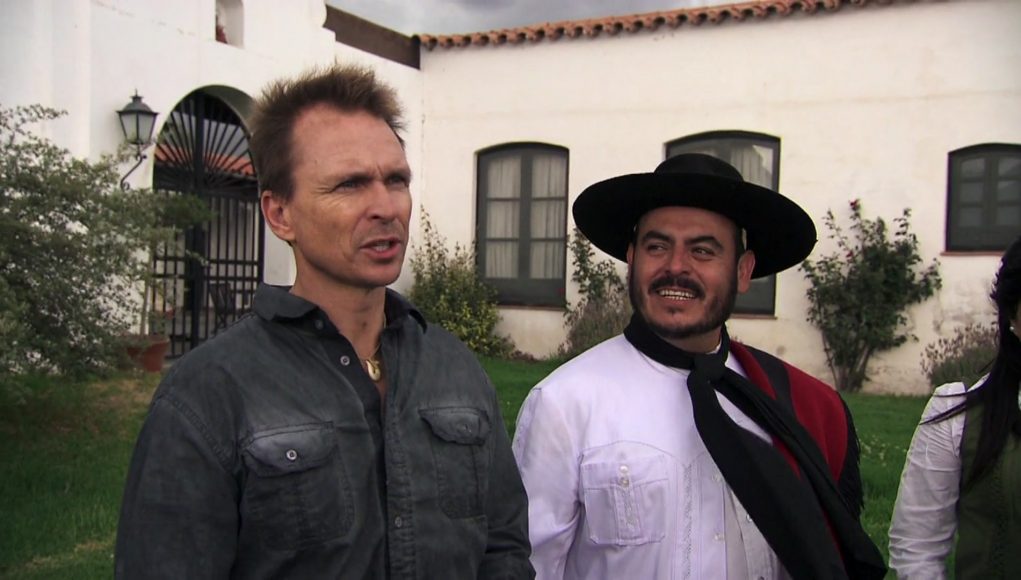 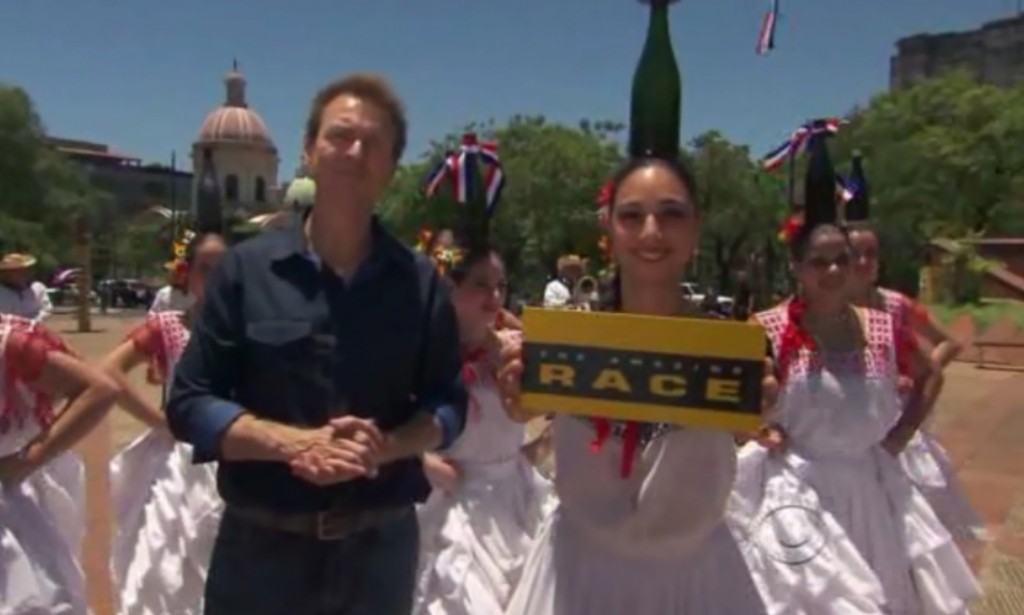 Do you like travel, reality television, and Paraguay? Then you may be one of the millions of people who watched latest episode of “The Amazing Race,” which took place in Asunción, Paraguay. Now in its 20th season “The Amazing Race” is an American reality show in which teams compete in a race around the world for a million dollar prize. As they travel from one country to the next teams take part in a variety of challenges related to local customs. In December of 2011 the cast and crew of “The Amazing Race” raced through Asunción, Paraguay. The resulting episode (aired on the American TV network CBS on March 4th, 2012) was a great opportunity for this unique country to shine in the spotlight!

Since the show is quite fast-paced here is a recap with highlights of the Paraguayan locations and traditions on display throughout the episode. Warning: this recap includes spoilers. The full episode, officially titled “Bust me Right in the Head with It,” is available on the CBS website (US residents only) and on Youtube. 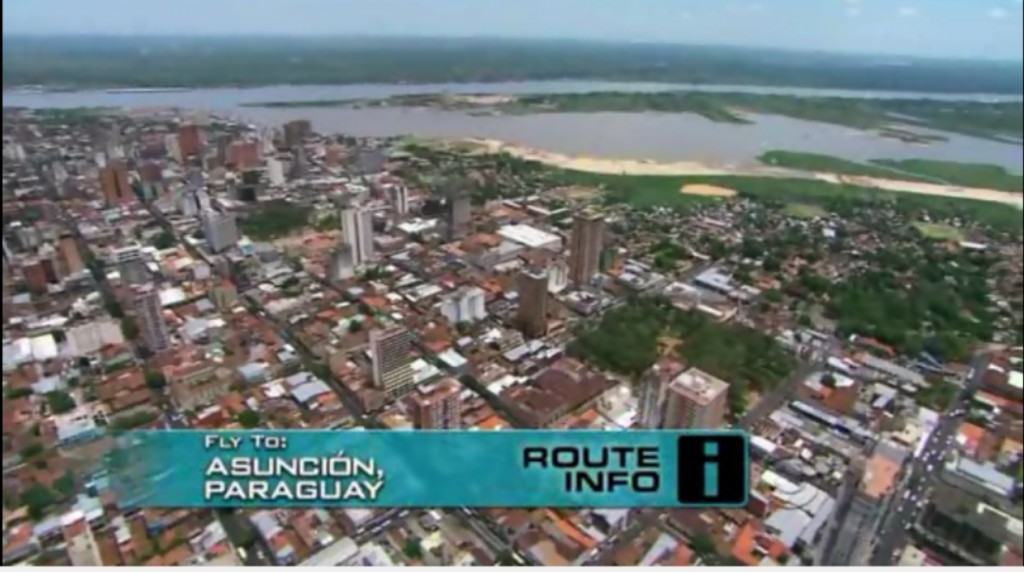 Teams begin this episode in Buenos Aires, Argentina, where they read a clue directing them to fly to the “Corazón de América (Heart of America), Paraguay.” They head to the international airport and end up on TAM and Pluna flights (for the record Gol, TACA, Aerolineas Argentinas and COPA also fly to Paraguay…Update: thanks to reader Glen for pointing out that Sol del Paraguay is a new option).

The first plane arrives and, along with a view from the plane as it lands, there are a few shots of Asunción. 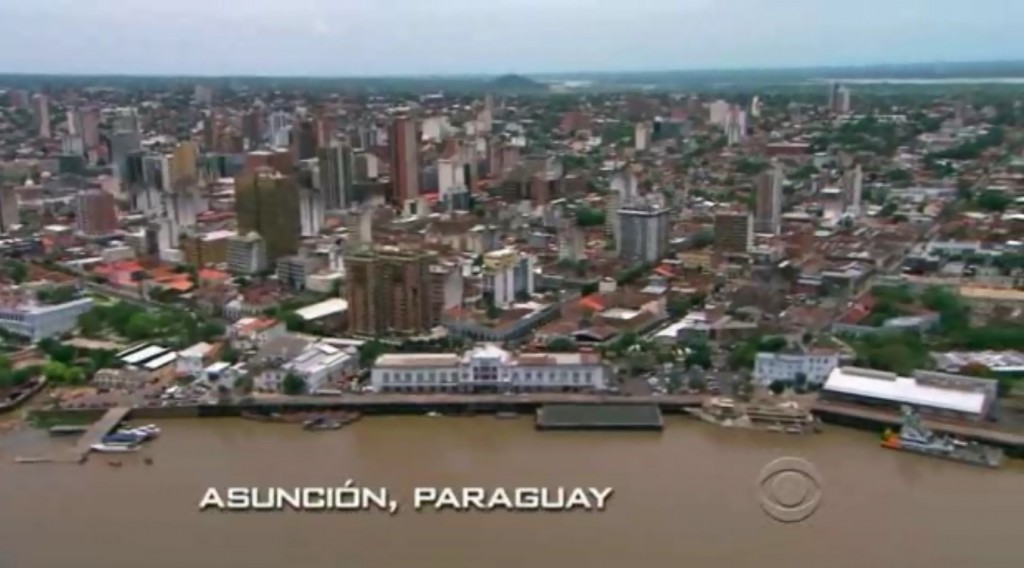 Upon arrival in Asuncion´s Silivio Petirossi airport the contestants catch taxis to a metal workshop to search for their next clue. They arrive at Metalúrgica Punta de Rieles at the intersection of Avenida Mariscal Lopez and Avenida Madame Lynch and search amongst the many colorful metal swing sets and barbeque grills. 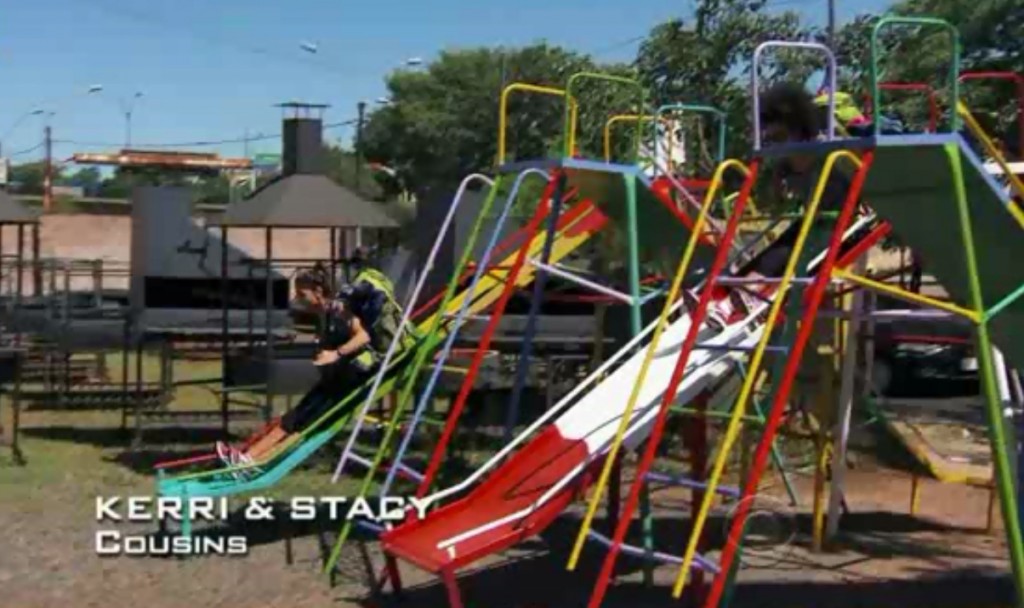 The clue directed teams to choose between two challenges: “Stacked Up” and “Strung Out.”

All the while workers at the Abasto (who build watermelon pyramids every day without a million dollar incentive) stood by cheering and taking photos with their cell phones.

Between the intense heat, heavy load, and tendency for watermelons to roll off the pyramid, this was no easy task. 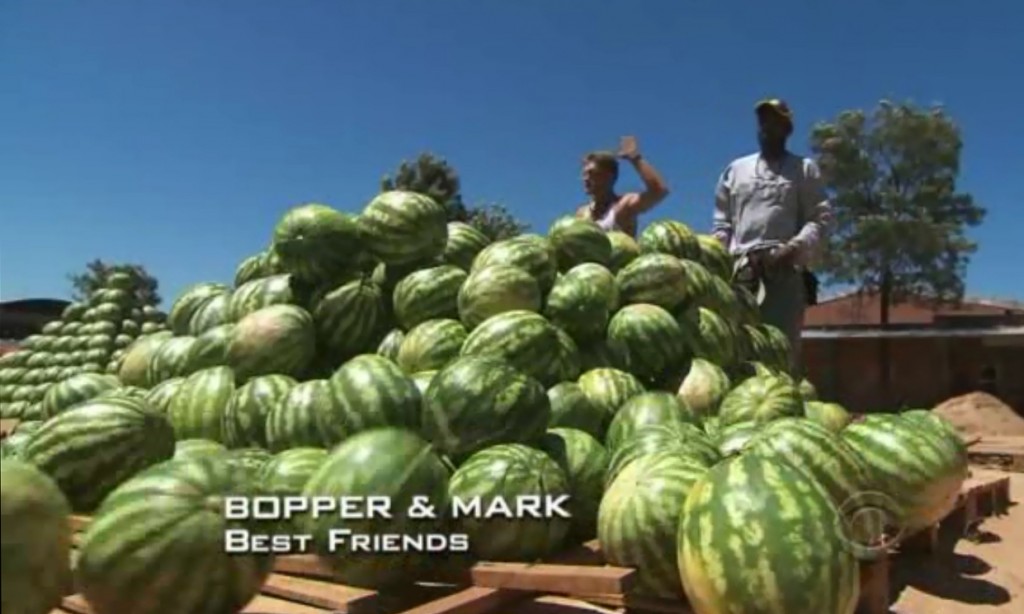 In fact, many of the teams eventually gave up and attempted the other challenge, “Strung Out,” instead.

For “Strung Out” teams had to head to the auditorium at the Universidad Nacional de Asunción (one of the country´s most important universities) campus in San Lorenzo and string a 36-string Paraguayan harp. This was made especially difficult because the strings were in a knotted mess.

All the while ten harpists decked out in ao´po´i outfits played classic Paraguayan harp compositions including Felix Perez Cardozo´s “Llegada” and “Pajaro Campana.” Though the task proved challenging, one contestant noted “How can you get all stressed when this music is so beautiful?” Maybe she should come back for the Festival Mundial del Arpa!

Once teams were finished with the watermelons or harp strings they received a clue directing them to the Plaza de la Democracia for the next challenge.

The clues, located on the upper terrace of the Plaza de Democracia (across the street from the Hotel Guaraní), instructed teams to choose one member for the next challenge based on the prompt “Who´s ready to use their head?” The chosen team member then descended to the lower level of the plaza where twelve female dancers were performing the traditional “Danza de la Botella” to the tune of a six man band.

In order to complete the challenge contestants had to perform choreography (including laying down on the ground) with a bottle balanced on their heads.

If this sounds difficult, keep in mind that the dancers were balancing five bottles at a time!

Upon completion of this difficult balancing act teams received a clue that directed them to the Escalinata de Antequera, the “Pit Stop” (finish line) for this leg of the race.

The “Escalinata de Antequera” is a long, wide staircase spanning a city block in downtown Asunción along Antequera between Fulgencio R. Moreno and Manuel Dominguez. At the top of the staircase is a historic monument dedicated to the “Revolución de los Comuneros.”

At the finish line teams were greeted by “The Amazing Race” host Phil Keoghan and Paraguayan model Fiorella Migliore. Fiorella was wearing a modernized version of a traditional Paraguayan outfit and gold filigree jewelry. Upon seeing her the one of the first place contestants remarked “Wow, you´re really pretty!”

As the afternoon wore on teams crossed the finish line, exhausted and relieved. Having fallen far behind, the two final teams were forced to race through the bottle dance challenge well after nightfall. Though the contestants were probably too stressed to notice it, the purple lights of the Hotel Guaraní and the red lights of the Panteón de los Heroes made for a very pleasant background to the action.

In the end the team of twin brothers were the last to reach the Pit Stop and were eliminated from the race. The episode ended with twins giving their exit interview in front of the nicely illuminated Palacio de los Lopez after which a harp song played over the end credits.

A great episode, in my mind! What did you think? What challenges would you come up with for the Amazing Race if they come back to Paraguay? Head on over to the Discovering Paraguay Facebook page to leave your suggestions and check out more fun moments from the Paraguay episode of The Amazing Race!