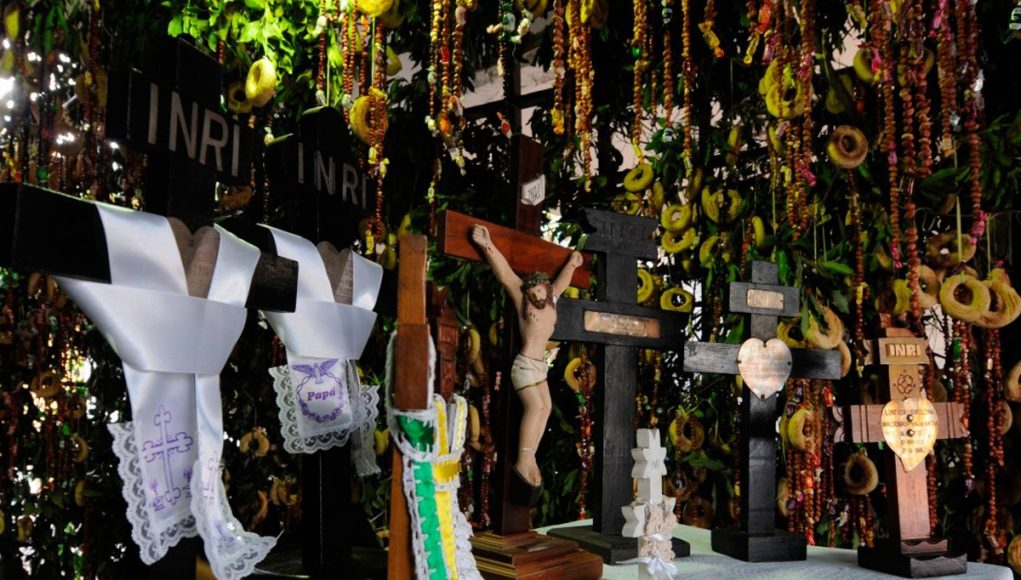 These last couple of days in Paraguay have been full of celebrations. First up was the “Teacher’s Day” on April 30th celebrating the country´s teachers. Then came May 1st, “Día del Trabajador” (Labor Day), much appreciated by those who usually have to work Saturday hours. And Sunday was an unofficial “Día del Fanático de Fútbol” (Soccer Fan Day) because of the Super Clásico, a match between Olimpia and Cerro, the two most popular soccer clubs in Paraguay.

To round out the festivities Monday May 3rd marked the celebration of “Kurusú Ara,” or “Día de la Cruz” in Spanish (and Day of the Cross in English). “Kurusu” means cross and “ára” means day in Guaraní. That´s “ku” (coocoo clock) “ru” (ruminate) “su” (sue) “á” (olive) “ra” (Ramada). During Kurusu Ára a special cross is used, usually one with historical or sentimental value to the community. The cross is placed in a dome shaped shrine made of laurel leaves which is then decorated. This is yet another holiday where chipa plays an important role. Chipas in the form of rings as well as animals are hung from the branches of the shrine itself creating a sort of Christmas tree (or maybe Christmas hedge) like effect. Once the ceremony and songs honoring the “kurusu jegua” (decorated cross) are completed these chipas are handed out to attendees. This is where the chipa gets the name “chipa jepo´o” which means “recieve or grab chipa.” Other decorations include candies and rosaries made of peanuts, all of which are also handed out along with steaming cups of mate cocido negro. These delicious parting gifts make Kurusu Ára celebrations especially popular with children.

The Day of the Cross is celebrated in Catholic communities worldwide but, as always, Guaraní culture contributed it’s own special twist to this religious tradition in Paraguay. According to Margarita Miro Ibara, author of “Alimentation y Religiosidad Paraguaya, Chipa – Pan Sagrado,” Paraguay’s Kurusu Ára festivities are an example of religious syncretism that occurred between Catholic beliefs and those of the Guaraní culture. She attributes the natural elements – the leafy shrine and animal shaped chipas – as paying homage to the Kurupí, a Guaraní deity representing fertility in both humans and nature. If the name “Kurupí” rings a bell it is because he is still present within Paraguayan culture in the form a “mito.” (I will delve further into the “Kurupi” myth in the next post of my Meet the Mitos series.)

The celebration of Kurusu Ára is not as widespread as in years past but is still carried out in pockets throughout the country – rural communities and towns as well as the more religious communities or neighborhoods within urban areas. A handful of Kurusu Ára celebrations took place in Asuncion this year including one at the Panteón de los Héroes downtown sponsored by the Secretary of Culture. Here is an article about Doña Jacinta who keeps the tradition alive in Asuncion´s San Gerónimo neighborhood.

A Guide to Internet Pornography Law