Loudspeaker announcements are a popular way to get your message across in Paraguay, whether you’re selling chipa or running for political office. Here are a variety of announcements you’re likely to hear throughout a typical day (both in a small town and the capital city).

Sorry, these vendors are NOT selling “churros,” the sugar covered fried dough sticks. They are selling “chura,” which is the Paraguayan term for offal. As you can hear in the above video, this often includes tongue, tripe, liver, stomach lining, tripe, heart, and kidney. “kidney”). Because of the nature of their product “chureros” usually operate early in the morning after animals have been slaughtered. Not the best sound to wake up to, unless you feel like making “caldo avá.” Note: “churero parlante” (churrero speaker) is a Paraguayan nickname for for people who are all talk since “churero” announcements tend to go nonstop, as you can hear in the youtube video.

One of the most ubiquitous announcements in Paraguay is that of the chipa truck (or motorcycle). Every morning and afternoon trucks rumble through the street announcing fresh chipa for the hungry masses. Of course, this is only one of several ways to obtain chipa . 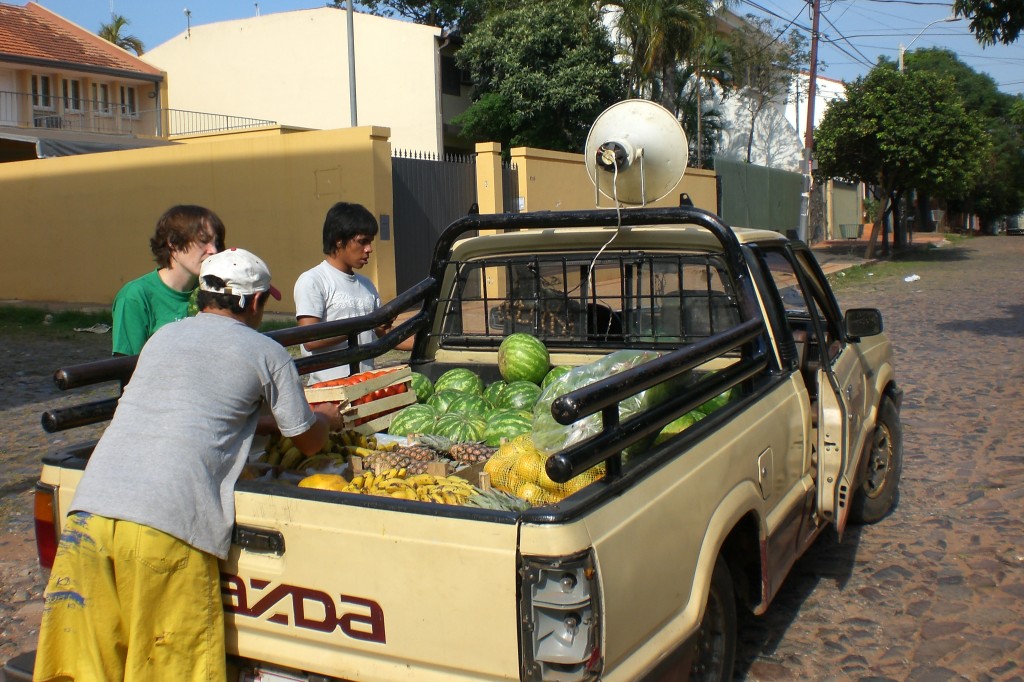 Some people like to go to the supermarket (it’s air conditioned!), Some like to go to the market (it’s cheaper!). Others prefer to let the produce come to them (it’s more convenient!). All over the city there are vendors who sell fruit and vegetables from the back of trucks, horse-drawn carts, and even push carts. They have a regular route and regular customers who know to head for the sidewalk, money in hand, when they hear the loudspeaker announcements.

And here’s a bonus one (also known as a ” yapa “) that has been around, I assume, since before the age of loudspeakers: the ice cream man’s whistle! For many older Paraguayans one little note is enough to conjure up memories of childhood summers.

Whether you’re selling Chipa or running for political office, loudspeaker advertising is a popular way to get your message across. These are some of the many announcements that can be heard on any given day (both in the towns and the capital).

Too bad, these vendors are NOT selling “churros,” the sweet desserts made from fried dough and sugar. They are selling “chura,” which means trifles in Paraguay. As you can hear in the video, this often includes tongue, gut, liver, tripe, heart, and kidneys. Given the origin of their product, the “chureros” normally operate in the morning after the animals have been slaughtered. It’s not a pleasure to be woken up by their ads, unless you feel like cooking “caldo avá.” It should be noted that in Paraguay a gossiping person is called “talking churero”, since chureros tend to talk into the microphone without stopping (as you can hear in the YouTube video).

One of the most ubiquitous advertisements in Paraguay is that of the chipero selling chipa on motorcycles and trucks. They pass every morning and afternoon without fail. In addition to vehicle dealers, there are many other ways to get Chipa .

Some people like to shop at the supermarket (there’s air!), Others like to shop at the market (it’s cheaper!). And others prefer to let fruits and vegetables go along with them (it is more convenient!). Throughout the city there are street vendors selling fruits and vegetables from their trucks, horse-drawn carts, and even wheelbarrows. They have their fixed routes and loyal customers who know when to leave their homes, money in hand, thanks to the announcements on the loudspeaker.

And I give you one of yapa that has existed for much longer than the speakers: the whistle of the ice cream man! For many Paraguayans, only one note is enough to make them remember the summers of their childhood.