In honor of Earth Day (April 22nd) I thought I´d talk about the three Rs of environmentalism, Paraguay style. Actually there is a 4th R but more on that later…

Most Paraguayans lead a low-impact lifestyle. This is a very poor country so many times it has more to do with necessity than choice – people simply have less stuff. One of the key ideas behind the concept of “reduce” in this case is the reduction of trash. And a great part of the trash we produce is in the form of packaging. In Paraguay many of the products for sale come with little packaging. In both the markets and supermarkets items such as produce, grains, detergent and even dog food are sold loose (out of large bins or rice bags) or in bulk. But my favorite example of eco-friendly packaging are the bunches of leafy greens held together with strips of banana leaf, as opposed to plastic twist ties. Paraguayans are skilled at making do with less and finding creative ways to use what they do have. This brings us to the second R … 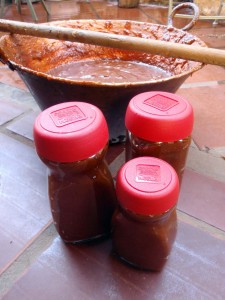 There is recycling in Asuncion, although perhaps not in a form recognizable to expats from Europe or the United States. You will not see homeowners (or maids) bringing colored recycling bins to the curb for collection. Here the system is more informal, at least from the consumer´s side. For the most part people just put all their trash out and forget about it. That is where the “gancheros” come in.

A “ganchero” is a person who goes through trash looking for recyclables. I´m not 100% sure but I presume the name comes from “gancho” or hook which would be used to pick out recyclables. Side note: In Argentina they are referred to as “cartoneros” because they look for “cartón” (cardboard).You have probably seen “gancheros” pushing large wheeled carts or riding horse drawn carts full of recyclables through the streets of Asuncion. The first round of collection occurs on the streets where people go through garbage bags and bins collecting metal, cardboard, glass and plastic. The second round of collection occurs at the dump where all the city´s trash is once again picked through by another set of “gancheros.” Here smaller items such as paper and plastic bags are also collected. 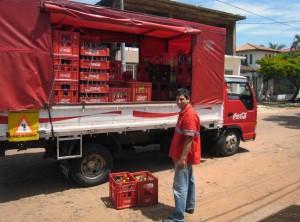 The gancheros sell all their gathered materials to the dump which then takes care of the actual recycling. My husband had the opportunity to speak with some “gancheros” working at Cateura, Asuncion´s main dump, a couple of months ago. According to them a good day´s works can bring on about Gs. 50,000 (approximately US $11) but the daily average hovers more around Gs. 40,000. Clearly the idea of people spending their days digging through trash is not a cheerful one; certainly it is less appealing than the idea of our recycling being whisked away directly from your home to a recylcing plant. But the reality is that this system creates jobs. Not the most pleasant of jobs, but jobs nonetheless. Attempts at reforming the way recycling is collected in Asuncion have been met with protests from the gancheros, whose livelihoods depend on this informal system. If you want to help out one thing you can do is pre-sort your recyclables before putting your trash out, thus facilitating their collection.

If you order a beer in Paraguay chances are it will come in a glass bottle (1 liter or 3/4 liter). Although beer (and soda) is also sold in plastic bottles and aluminum cans, glass bottles are more prevalent for large scale sales. Large trucks loaded down with plastic crates full of glass bottles (usually 12 per crate) rumble throughout the country stopping at supermarkets, almacens (small stores or “bodegas”), and restaurants, exchanging full bottles for crates of empties.

How does this system work on a smaller scale? First start with the primordial bottle for which you will have to pay a deposit. Every once in a while supermarkets have promotions for buying an entire starter crate of bottles (full of course). When you return to the supermarket with your empty bottle you will be given back the deposit (usually at the customer service desk) in the form of a credit towards a full bottle. According to some people soda tastes better out of glass bottles anyway. But if you prefer plastic you can still participate in this eco-friendly practice. Just make sure your 2 liter bottle of soda says “Retornable” on the label.

What are the benefits of Plyometric And Stretching Exercises?

Learning How To Buy An N95 Mask